You are here: Home / Alzheimers / Understanding the Challenges of Early Onset Alzheimer’s – Brian Kursonis Shares From the Heart 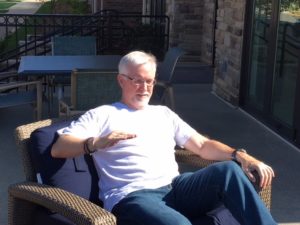 Charlotte resident Brian Kursonis has become the new face of Alzheimer’s disease. At age 55, Brian was diagnosed with early-onset Alzheimer’s. Those who watched the 2017 World Series probably saw his face splashed across the big screen. He is part of a national ad campaign promoting Alzheimer’s research, and he has become a well-known advocate for those living with Alzheimer’s and their caregivers.

Local authors Ann Campanella of Huntersville and Mary Ann Drummond of Harrisburg, who have both written extensively on the subject of Alzheimer’s, recently interviewed Brian about the challenges he faces with daily living.

Brian is among the estimated 5.5 million Americans currently living with Alzheimer’s dementia. Approximately 200,000 of these individuals were diagnosed before the age of 65. Alzheimer’s disease causes brain tissue to shrink regardless of the age of onset. Eventually, those with this condition lose the ability to care for themselves.

“You have a unique insight into Alzheimer’s,” says Ann, “because of your intelligence and the fact that you’re in the early stage of the disease. Tell us some of the issues you face.”

Something as ordinary as dining out presents a challenge to someone with early-onset dementia. “When the waitress brings the menu, it can be impossible to read it,” explains Brian. “The different-sized fonts are confusing.” When she asks, “What can I get you?” Brian can’t always answer. “If it’s been a long day, it can be hard for me to form words,” he says. “Or maybe there’s nothing in my brain at the moment.” 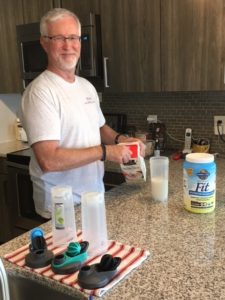 To simplify his life, Brian drinks protein-laden supplement shakes for breakfast and lunch, and he cooks dinner in his microwave. “I try not to use the stove, unless I get a really strong hankering for a grilled cheese.” Brian smiles as he holds an imaginary sandwich in the air. “I try to keep things really simple – really safe,” he says.

Mary Ann asks: “Are their other challenges you face with the community-at-large accommodating the disability of Alzheimer’s?”

Brian asks Mary Ann to repeat the question, so he can process it. Then he responds: “At the airport, I can’t use the machine that spits out your boarding pass. I have to ask for help. Sometimes people think I’m trying to skip ahead in line.” When Brian travels, he always wears a tee-shirt that has the word “Alzheimer’s” on it and his medical alert bracelet. “I think it helps,” he says.

While Alzheimer’s has robbed Brian of certain abilities, he has hope, courage and, most of all, determination to help others. Ann and Mary Ann ask Brian about his work.

After his initial diagnosis, Brian created WithALZmyHEART, a website designed to walk people through the first stages of an early-onset diagnosis. His current passion is Faith2Care, a company he created that connects caregivers, people of faith and those in need. “I couldn’t qualify to be a greeter at Walmart, but I’m heading up a National nonprofit organization!” Brian smiles as at Ann and Mary Ann as he affirms the dichotomy he’s living.

When asked if he has any last words of wisdom, Brian tears up. “I want to let [people] know that just because they have Alzheimer’s disease, life isn’t over. For me it’s not just words. I’m trying to live that example.”

Ann Campanella, former magazine and newspaper editor, is the author of Motherhood: Lost and Found, a memoir about her mother’s 14 year-descent into Alzheimer’s. Mary Ann Drummond, RN, is a dementia educator, speaker, and author of titles including Meet Me Where I Am – An Alzheimer’s Care Guide and I Choose to Remember and co-author of Grandma and Me – A Kid’s Guide for Alzheimer’s and Dementia.

Like Loading...
« Helping Children Understand Alzheimer’s Disease – Getting the Conversation Started
Concerned About Your Memory? Consider Self Testing for Early Alzheimer’s Detection »

Buy at Amazon   “Meet Me Where I Am" is an essential resource for Alzheimer’s caregivers, designed to ... END_OF_DOCUMENT_TOKEN_TO_BE_REPLACED

“I Choose to Remember” was originally designed as an activity aide for individuals with Alzheimer’s ... END_OF_DOCUMENT_TOKEN_TO_BE_REPLACED

Meet Me Where I Am – A Dementia Poem

"For over 20 years in Senior Living and caring for thousands of people with Alzheimer’s I have yet to find a comprehensive book with information, facts, and the possibilities………. until now!
Read More »

To provide uplifting educational resources and materials for caregivers and those they care for.